These guides are designed to help you write and perfect your code.

The guide covers SproutCore's Run Loop. By referring to this guide, you will be able to:

The Run Loop coordinates all the events within your application, which includes primarily flushing bindings when observers update. This helps make sure that events stay synchronized and run at the proper times. One of the main ways this will affect your application is that bindings do not propagate unless a Run Loop runs. Also, Views will only render updates once per Run Loop, thus avoiding unnecessarily touching the DOM. This keeps display updates extremely fast even if many properties are changing per Run Loop.

SproutCore manages the Run Loop for you, automatically starting a Run Loop when it receives any browser events or user input. The only case in which you will have to manage the Run Loop from within your app is if you have a callback from an external library that is not managed by SproutCore. In this circumstance, you will want to trigger a new Run Loop by wrapping the code in SC.run(). This will create a new Run Loop for that bit of code and will make sure your application continues to update as expected.

Here is an example of triggering a Run Loop when a Web Worker message event is fired.

See SC.Event.addEvent() for a SproutCore compatible way to add the `message` event listener in the example above.

When working with unit tests, you will also have situations where you need to force bindings and observers to update so that you can check for the correct results. In these cases, it is completely legitimate to manually invoke the Run Loop. Normally user events would trigger the Run Loop, but since your tests are automated, there are no user events taking place.

You may also find that when you are working in your browser's JavaScript console that, when you set a variable, your application's interface doesn't update as you expect. This may be caused by a Run Loop not firing (since you aren't interacting directly with the application no events are being triggered). In this case you should try invoking the Run Loop manually or just move your mouse over the application to trigger a new event.

Remember, you rarely need to manage the Run Loop manually from within your application. If you aren't certain of why you are forcing a new Run Loop, then you may be doing something wrong.

SC.RunLoop provides three methods for greater control over the execution of code within a Run Loop: invokeOnce(), invokeLast() and invokeNext(). All methods take the same parameters, a target and a method and, depending on which function is used, the method is called on the target at a specific point in the Run Loop.

The following describes the execution order:

You will likely never call these methods on SC.RunLoop itself, since there are matching convenience methods defined on SC.Object (i.e. in any subclass of SC.Object you can call this.invokeLater(method)).

To best illustrate the different stages of the Run Loop, see the following diagram. 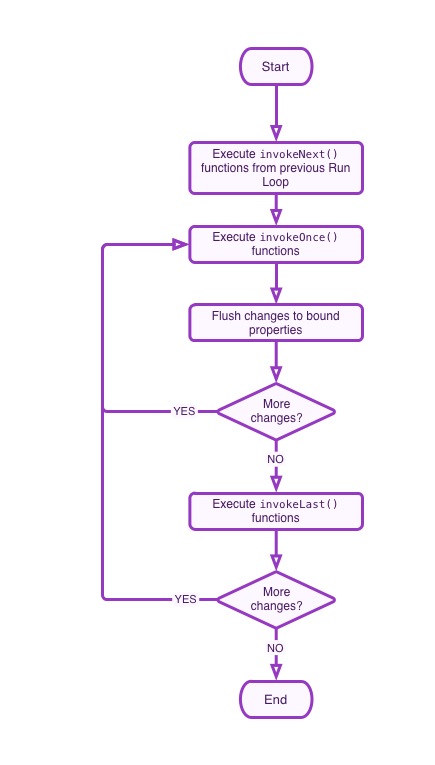 You will notice the recursive "More changes?" stages. These exist because each time a wave of changes is propagated, it may cause several additional observers to fire and more code to be run. The Run Loop keeps flushing these waves of changes until everything is stable, thus demonstrating another key benefit of using Run Loops; that at the end of each Run Loop and before the next event, the application's state is guaranteed to be stabilized.

Here are some typical usage scenarios for each of the Run Loop methods:

Therefore, as the previous usage scenarios suggest, you will not typically find the need to use any of these methods. The most common exception is that you may occasionally use invokeLast() to ensure that your Views have rendered before doing some operation on dependent on their rendered output, such as an animation.

If you add the same target and method pair multiple times to any of these functions, it will still only be executed once.