These guides are designed to help you write and perfect your code.

After reading this guide, you will be able to:

1 - How Unit Test Cases Are Loaded and Executed

When you run a unit test, SproutCore retrieves and runs the source unit test JavaScript and renders the results as an HTML page.

SproutCore does this in the following sequence:

The advantage is that your unit tests are run in an environment that is very close to the actual combination of code and resources that will be available to your application when it runs.

It also means that if you write code that runs on page load BEFORE the main() method is called, it could be executed even in test mode. Make sure that any code you write to run at early page startup can deal with being loaded in test mode as well.

The new Abbot tools do not yet support the test runner. Until they do, you should follow the [Running Selected Unit Tests](running_unit_tests.html#running-selected-unit-tests) section below.

The easiest way to run unit tests is to simply visit the built-in unit test runner by starting your browser and navigating to http://localhost:4020, then selecting tests from the application list as shown. 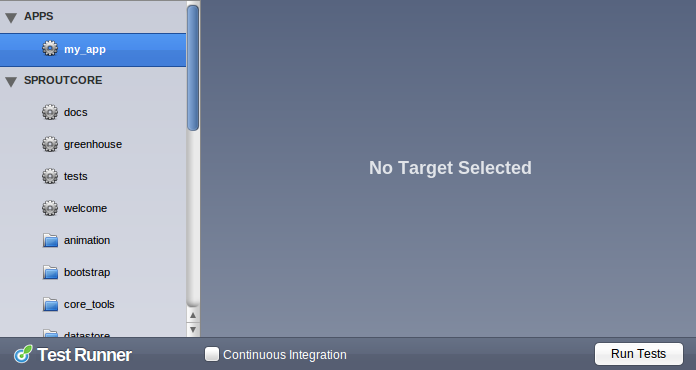 Suppose your application is named "my_app". To see a list of your unit tests, in the left hand column under APPS, double-click "my_app": 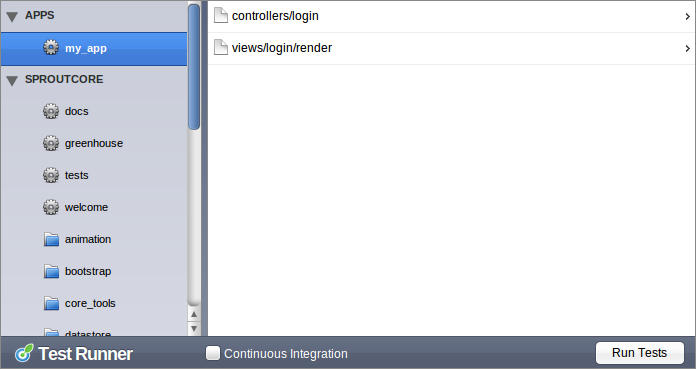 Run all the unit test cases within a file by clicking on it.

The "Using Continuous Integration" checkbox and the "Run Tests" button are under construction.

When the test run is complete, the results are displayed as follows: 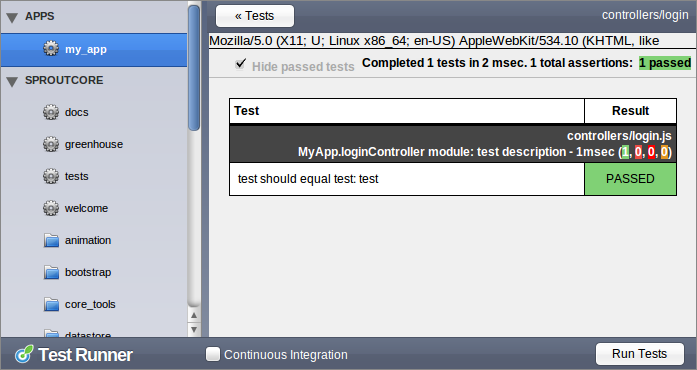 Sometimes you may want to run unit tests manually outside of the test runner. For example, perhaps you have a continuous integration environment and would like to use Selenium to evaluate the results of running your unit tests.

All unit tests for an application can be found at an easily computed URL.

The computed URLs can run all tests on all applications or a subset of them as detailed below.

Any unit test file can be run from a browser using a URL in the following format:

As an example, suppose you have a unit test file located at:

To run this test, browse:

3.2 - Running All Unit Tests in a Directory

Note that the HTML file loaded at this URL will contain all of your unit tests files concatenated together in a single HTML page. If your tests are not properly isolated, they may interfere with one another when loaded this way, though this is rare.

3.3 - Running All Unit Tests in an Application

Note that, like the combined directory tests above, this global test file will contain all of your unit test files concatenated together in a single HTML page. If your tests are not properly isolated, they may interfere with one another, causing the unit tests to pass when loaded individually but fail when they are loaded together. This situation is rare, but you should be careful to write your test files so that they will not clobber one another at load time.

This concludes the main programming guide for working with Unit Tests in SproutCore applications. You're now ready to change the world with awesome unit tests!

On to the SproutCore Testing Guidelines »